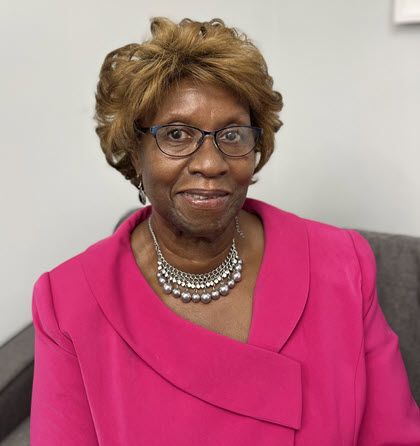 Jurisdictional Supervisor Mother Ruby L. Williams, is married to a true man of God, Elder Johnny Williams. Mother Williams is the daughter of the late Apostle O.B. Harris and Missionary Larcenina Harris. Born and raised in the state of Alabama, where her parents raised her to love and fear God in the Church of God In Christ.

At the age of 17 a young Ruby decided to move to Atlanta, Georgia. She attended an Accredited Business College, Georgia State for English and Atlanta Area Tech for Real Estate. Over the years she has worked for the youngest City Councilman for state of Georgia, worked for a radio/TV station and worked politically in the years of 1976 and 1980. Mother Williams has also been a Kindergarten Teacher and worked as a Dekalb School Bus Driver/liason advisor for students.

One day Ruby decided to read the bible, not to be saved or to obey, but as one more “intellectual thing” to do, and the word grabbed her heart and showed her why the sky is blue and why the bird sings.

She remembered her Godly upbringing and then gave her life to Jesus and was saved and filled with the Holy Ghost. God has ordered her to serve and that she does.

Mother Williams is now the state supervisor of women for Georgia Metro Ecclesiastical Jurisdiction, under the leadership of Bishop Michael J. Paden, Sr. Mother would advise you to “Focus on the call of God and don’t let anything stop you”.

Mother Williams desires to strive to be like Jesus and to continue to help build the body of Christ and help one of the greatest called Bishops in the person of Bishop Michael J. Paden, Sr.